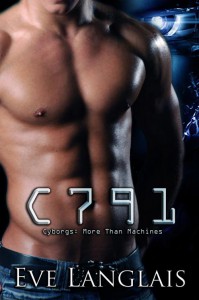 I struggled with the rating on this one.

I loved the plot.  Humans that were enhanced to the point they are no longer thought of as people.  The humans call them machines/robots.  They call themselves cyborgs.  They rebelled.  Nice twist.  I should have picked up sooner who C791 was, but oh well.  Nice.  I enjoyed the story.

What I didn't like:  Don't get me wrong, I like Alphas.  However, there is a fine line between that being sexy/romantic to not so much.  Joe repeatedly referred to Chloe as "his."  There was one scene where Chloe was talking to Seth.  "...he ripped Seth away from Chloe's side..." "..slinging Chloe over his shoulder..."  Joe:  "You seem to have forgotten who you belong to."  Chloe: "What are you doing?"  Joe: "Showing you who owns your body."  I could have gone without this scene.  It was unnecessary, not romantic, nor sexy.  This scene knocked this down and I thought about giving a 2, but taking this scene out, I would have given a 4.  So I went with a 3.

Any plot-line or trope, no matter the genre, that treats the female character as the male character's property is not sexy, romantic, and should not be treated as such.