Hunted by the Others 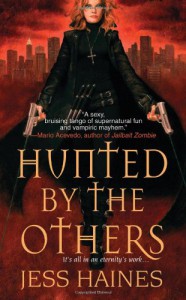 Shiarra Waynest and best friend Sara Holloway own a PI firm. Both are human and stick to human only cases. Then Shia is contracted to find an article that allows someone, with the ability, to control others against their will. Chaos ensues.
I liked the world. I liked that werewolves, vampires, and mages were out in the open. It was interesting that 9/11 was the catalyst for them coming out. Laws were passed to protect them and humans. Of course, that spawns extremes in both directions. Groupies that think it's cool/are addicted to "the Others," and the White Hats who would like to see the extermination of "Other."
This wasn't bad, but wasn't great for me. It was average. I think, in part, because of something that Shia does (or rather doesn't) that I just couldn't get over. She's part owner with her friend Sara. However, she has NO idea of finances and that fact they weren't making ends meet. I thought she acted young and immature at times. I also didn't care for how over-bearing and protective her family was. They were stuck on her finding a guy and having him take care of her. I thought, what decade is this?! Granted they are only present for a very small portion of the book and it was more then enough. I liked Sara and Arnold. Chaz was okay. Royce was eh. I doubt I will read the rest in this series.