If the Slipper Fits 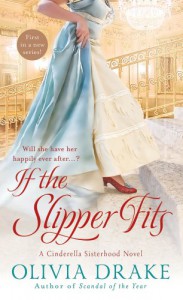 Annabelle was abandoned as a baby. She knew nothing of her parentage. She's lived, worked, and taught at an all girl's school. While the school educated her, she's had to work for her keep. She's always been treated differently and doesn't have close friends. Simon was in love with a woman who then decided she wanted Simon's older brother. Simon, bitter, bought a commission in the army and left. He had no contact with his family for years. His brother and sister-in-law's deaths brought him back. Simon is the guardian of his nephew.
Annabelle gets hired by Clarissa to be Nicholas's governess. She gradually makes changes and Nicholas comes out of his shell. I liked both characters, Annabelle is strong and outspoken. Simon is bitter, but comes out of his funk.
What I didn't "buy" was the romance- to a point. Annabelle and Simon didn't spend much time together, IMO. Simon does spend plenty of time "courting" Louisa. I didn't think the reveal of Annabelle's parentage was necessary. But all said, I did like it.