Hate to Want You 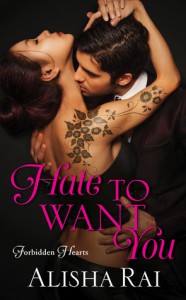 Livvy and Nicholas were childhood sweethearts. They grew up together. Their grandfather's founded at grocery store that became successful and became a small chain of stores. Things are happy. Until an accident kill's Livvy's dad and Nicholas's mother. Nicholas's father (Brendan) does something underhanded and takes over Livvy's family's control of the business. Livvy and Nicholas break up. For the next ten years, they see each other for sex on Livvy's birthday.
Having just turned 30, Livvy decides it's time to try and reconnect with her family. Her mom had a fall and broke her hip, this gives Livvy a reason to come home too. The accidental effected every single person in both families. One exploited the situation and used it to control others, while others members retreated and dealt with it in their own way.
I LOVED this book! Both Livvy and Nicholas had so much depth. While this is a romance book with a HEA ending, there are some serious issues in this book. I do admit to some frustration with how some characters allowed Brendan to dictate their lives, but I also think that was realistic given ages/circumstances. I liked the moment Tani and Livvy talked (at least a little). I would have liked more on that front.
I wonder about Eve's paternity; there was a moment that made me wonder. Luckily, she gets her book! Sadia and Jackson are next! And I admit I am curious about Jackson. Just what has he been doing? And was he framed? Maybe by Brendan?
Ripped Bodice Bingo: I'm using this for the enemies to lovers square. (L&N are lovers to enemies to lovers).