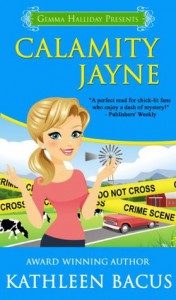 Spoilers and a rant.

Was a Kindle freebie at one time.

Tressa is also known as Calamity because she is clumsy and a bit like the village idiot. She also lacks ambition and doesn't know what she wants to do with her life. I wanted to like her, I did. But, really? How can someone be so TSTL? Some clumsiness, is fine, but Tressa is extreme. Very extreme. She takes the WRONG car. She talks about how broke she is, but does she save money? Hell no! "Hey a girl can go without eating, but she must have a new pair of shoes at least monthly." She doesn't lock her car and has a gun stolen out of the glove box. She STILL doesn't lock her car and Joe surprises her from the backseat. I had to rant to my husband about this one. The envelope that was missing and she swore she didn't have- being in her work VEST the whole fucking time!
I also strongly disliked the love interest, Rick, or as Tressa calls him, Townsend. Rick is the one who came with the Tressa's nickname Calamity. He is the first one to suggest she was imagining a dead body. He clearly thinks she's an idiot. Sorry no. Tressa deserves better than that jackass. Manny had the perfect nickname for Rick: "Rick the Dick."
So why did I keep reading? I liked the writing. I thought it was humorous, I admit to laughing out load a few times. I kept hoping, hoping Tressa would just stop being such an idiot. And easily distracted by a hot body. She does get a little better. I thought- maybe- a little- of her aimlessness/stupidity was just an act. Maybe? The secondary ones were fun- Joe and Hannah!
I won't be reading the next. I really don't like either main character - for different reasons.
And then at the very end of the book:
"Enjoyed this book? Please leave a positive review and a 5 star rating on Amazon.com."
So, if I didn't like it, don't review it? Leave a rating? Only 5 star ones count? Excuse me?
I was thinking a 3*, because it kept me entertained and as I said above, I liked the writing. But now, after that? It's a 2.
Ripped Bodice Bingo:  Damsel in Distress
rippedbodicebingo read-2018