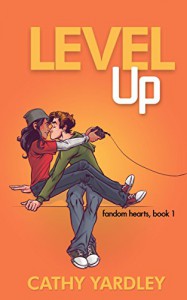 Tessa is an introvert, geek, gamer, into Fandoms, and an engineer. Multiple mentions are made of her being a female in a male dominated industry (and I will say gaming too) and her being an introvert. The group she wants to join is all male and led by Abraham. Abraham is an asshole. To everyone. But, I could certainly see how she could take it personally. Jose, one of the members, hits on all who are female. I didn't like him either. (It mentioned the secretary, Stacy, who Jose asked out often, continued to tell him no. Ask once. If you get a no, that means no, and back off. Anything more, it is NOT cute! It IS harassment!). So, IMO, part of her lack of a promotion to the (game) engineering group could be because she's a woman, but also be because of her lack of interaction. With anyone.
Tessa and Adam are roommates, Tessa having moved in after Adam's long-time girlfriend broke up with him and moved to New York. I liked that Adam wasn't a player. He was close to his close-knit group of friends, but otherwise didn't socialize outside of that group. I thought he was honest and supportive of Tessa without being overbearing. They both "get" the other. I liked their relationship and could believe it.
For all the mentions of her being an introvert, she can stand up for herself and those she considers friends without any problems. She is not a doormat. I was pleasantly surprised.
One thing that was jarring were the perspective changes or scene/time changes without a space between paragraphs. It happened so often, the movie in my head stopped and I had to read the sentence again, so the movie in my head could pick right back up.
I also liked that the location was somewhere I've been! My sister lives in Woodenville and we drive through Snoqualmie to get there. Highly recommend visiting Sqnoqualmie Falls.
Looking forward to more!
Characters (for me and my memory):
Tessa (Teresa):
Ani- long time friend. Kyla, Stacy, Cressida, Rachel, Hailey. Hailey, Cressida, and Rachel are sisters and own the bookstore. Kyla works for her brother and is an costume designer (in her spare time). Cressida is agrphobic. Rachel and Hailey work at a casino. Rachel is going to college too. Mallory was also mentioned, but can't tell you anything about her.
Adam:
Abraham (lead and an asshole), Rodney, Jose (harasser of women), Fezza.
Ripped Bodice Bingo: tech in the city square