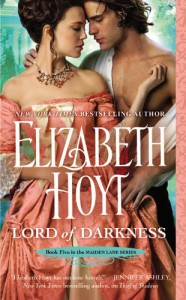 After the previous book, I was worried about potentially this being not as good. I needn't have worried! This is Meg's (Margaret) and Godric's book. At the end of the previous book, Megs is pregnant. Her brother, Griffin, knows something about Godric and blackmails him into marrying Megs. This book opens up 2 years after their marriage.
Margaret, having lost the baby, wants a baby and to avenge Roger. I loved the book's opening with her trying to shoot Godric (unbeknownst to her). This was definitely a slow burn as they both got to slowly know the other one. I thought the guilt each felt for wanting to move on was realistic and was something each overcame. I liked that they talked about their pasts and feelings. I liked that Godric and his stepmom talked. (What an awesome stepmom!).
One thing I like are the appearances of previous (and future) characters. Artemis is in this one and her book is next (and I'm very curious; there's also her brother Apollo).

Previous book: Margaret (Griffin's sister) was in love with and pregnant by Roger Fraser-Burnsby. He's murdered. Presumably by Ghost of St Giles.
This book: Earl Kershaw-> murdered RF-B, and killed by Godric in self-defense, was also responsible for abuse and enslavement of the poor girls- Seymour (killed in from previous book was his partner (I assume).
And yes, Megs gets her baby.
Godric's 1/2 sisters- Sarah, Charlotte, Jane. His stepmom- if she had a name, I missed it/don't remember it.
Captain Trevillion lets Godric go. He suspected Godric was the GoSG.
I don't know if they will be characters in future books: Hippolyta Royle- an heiress that has taken London by storm. Robin Goodfellow- an actress at Harte's Folly.

Alf was one of the people hired by the "Lassie Snatcher's" before she broke rank and helped Godric.  She's disguised as a boy.