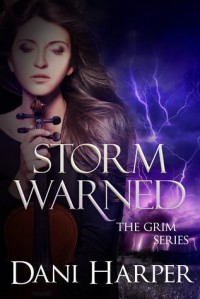 Caris was turned into a grim (a death dog) by a fae prince who sought more power. Prior to that she ran her father's farm, while he drank his days and nights away. Caris was a gifted musician. Liam was also a gifted musician whose career was flourishing. After his wife cheated on him, he retreated and became a hermit on his family's farm.
This was an entertaining read with fun secondary characters. I really liked Caris; she was strong and stood up for herself. Ranyon (I've got a charm for that!) and Morgan make appearances. Aidan, Brooke, and Rhys are mentioned in name only.

Booklikes Bingo: It was a dark and stormy night