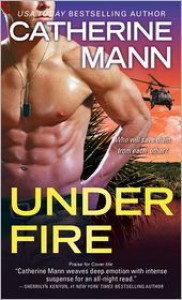 Liam and Rachel were introduced in the previous book. This picks up about 6 months later; Rachel has relocated to FL and trains therapy and emotional support dogs. She was burned out on rescue. One of the vets she is helping confides in her some things he witnessed before becoming injured. Problem is, no one believes them and once her dog is poisoned, she turns to Liam for help.
Having fallen for each other during the earthquake rescue they were both on earlier; neither pursued a relationship with the other for Reasons. I did think both characters, but this fell short for me. It felt flat. On the other hand, I liked reading about Brandon and Catriona. I would have liked more about that relationship.
For romance-opoly: the military square