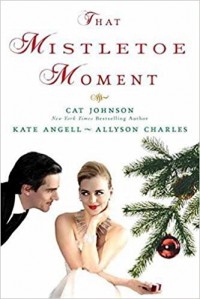 As with just about all anthologies, some stories are better than others and that was the case with this one too. The 1st story- A Boyfriend by Christmas was the best and if I rated this story by itself, this would be 4*. Noelle and George have been dating almost 5 years. They grew up together, but didn't start dating until they were in college. Their parents are friends and next door neighbors. After having (finally) realized he really wasn't just that into her/right for her Noelle breaks up with him. On Thanksgiving. Her sister sets her up with a fake boyfriend app. Noelle accidentally texts the wrong person (Nathan) and a relationship begins. I thought Noelle was a little batty, but relate-able and I liked her. I also liked Nathan. The romance helps fast, but I didn't really have a problem with that.
All I Want for Christmas 2*
Didn't like Daniel.
Her Favorite Present 2*
Gabe is one of the founders of the fake boyfriend app. I couldn't warm up to him. He had a less than favorable opinion of the people (mainly women) who used his app.
For romance-opoly using this for the last mystery square (and only one more to go!)