How to Host a Killer Party 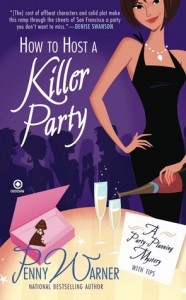 Presley is a party planner (I mean event coordinator!) who also has ADHD. She was laid off at her prior job in the psych department at the U of San Fran. She has a habit of diagnosing people. Her mom, who now has dementia, was a successful party planner, so Presley hopes to take up the reins. She gets a chance hosting the mayor's surprise wedding....at Alcatraz. Things don't go as planned and there are 2 dead bodies and Presley is considered a suspect.
I did like this. I was interested and the who-done-it was good, as was the motivations behind it. But, Presley came off as a ditz. Did I mention she has ADHD & she taught psych? Sometimes when a character says something stupid/wrong/pick your poison, it makes them more relate-able. Not so much with Presley. The secondary characters were fun.
Will I read the next and rest in series? Nah. (And did you know Presley was a psych major..... and has ADHD? The reminders constantly got old. Fast.)
I read this for Romance-opoly Sleuth Street moon track